Shipping Cars Across the Country: Then and Now

The concept of a form of transportation that did not rely on horses and carriages had been around for a while before the actual invention of cars. Karl Benz, the co-founder of Mercedes-Benz, is credited with the invention of the world’s very first petrol-powered automobile. But, his early car was very expensive and therefore only available to the most wealthy of people. It was not until Henry Ford’s Model T that cars became more affordable to the general public. But, there was still a problem: getting the cars throughout the country quickly and efficiently through a reliable car shipping service.

One of the earliest methods to ship a car was via railways, which used a specially designed boxcar. While this method made it possible to ship multiple cars at once, it was extremely expensive and time-consuming, and not a very popular option. It left few people with cars, as not everyone was willing to pay the price that came with shipping a car through the railway syste

ms. But, as roads continued expanding, people began realizing just how useful they were in conjunction with cars to get various small goods across the country. If they could send these smaller items state-to-state via roads, why not be use them to send bigger items, such as cars themselves, as well?

Up until this point, the main method used to get cars across the country was for a seller to have the car physically driven to the customer. It was a method that had many flaws: it took more time, it risked a great deal of damage to the car, and the cost was incredibly high. As a result, this led to Alexander Winton, of The Winton Motor Carriage Company of Cleveland, to create the very first 18-wheeler truck in the 1890s, becoming the first automobile company to offer a new kind of car shipping service, so that cars could be transported without having to actually be driven to their final destination. Although these early “automobile haulers” could only transport one car at a time, they helped the already booming automobile industry to grow even more, by making cars accessible to people throughout the country. But, it was still not a perfect solution, and companies like that of Winston’s were continuously looking for ways to improve the design and method.

The Early Trucks Were Smaller

As mentioned before, these early versions of cargo trucks were rather small in size, while cars back then were fairly big and bulky and took up a lot of spa

ce. This means that the trucks could only safely hold one car at most per trip, so while you no longer had to drive the car itself to the buyer, it was still a slow process in getting multiple cars to different areas of the country. Meaning that shipping was still a very time-consuming process, and could mean a loss of business.

Chains and Hooks Could Cause Damage

Another issue with shipping cars via these early trucks was the chains that were used to help secure the car in place during transport. Because this was still a new method of shipping, there was a lot that people had to learn, such as how to properly secure a car in the truck with the heavy chains provided.

If the chains were applied too tightly to the vehicle, it could actually put too much pressure on the car, causing the frame to bend out-of-shape. This was bad because a bent frame can not only lower the value of the car, but it can also cause irreparable damage to it. If the chains are put too tightly, there is also a risk that they rip the car entirely from the frame, which obviously would be even more damaging and may not be repairable. Alternatively, if the chains are too loose, the car can move around during transport and get scratched or dinged up, or may even lead to parts breaking or coming loose.

also affected how well a car ships. If the company did not use the right kind of hooks, they could cause all sorts of damage, from scratches to bent frames. Moreover, if the hooks were placed on the wrong holes, this could also lead to the frame tearing or falling off entirely, and it could also leave the car able to move around during transport, which would add even more damage.

Besides all the physical difficulties of shipping a car, there were very few companies that offered these sort of shipping services. This made finding a company to ship a car to other parts the country not only difficult but also very expensive. You always want to do thorough research for every company you considered. You wanted them to have a good reputation when it comes to safety, you wanted to be sure that they completed the shipment in a timely manner, and that there were no concerning complains about them. Of course, you also had to make sure the company had routes to your desired destination, as some companies may not have been willing to go everywhere throughout the country.

Since these first cargo trucks and car shipping companies, a number of improvements have been made. For one, the design of the cargo trucks used to ship a car has changed, making it possible for companies to ship multiple cars in a single trip. Not only can these trucks hold more cars, but they also come with tracking capabilities, making it possible to track the location of your new car while you wait for it to arrive straight to your door. Besides that, shipping companies now also offer insurance for your shipment, providing even more protection so that you can have the piece of mind that your new car is being well taken care of during transport and that, should anything happen, you have protection and will not be left to deal with yourself. 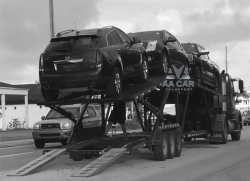 Another new option seen with today’s auto shipping services include the choice between open car transport and enclosed car transport. Enclosed car transport is the traditional method used to ship a car and means exactly what it sounds like— the cars being transported are entirely covered and sheltered from view. This means that cars shipped via this method are protected against the elements and from other factors, like road debris. While anyone can ship a car using this method, it is primarily recommended for people looking to ship expensive luxury or classic cars, which require more protection.

Open car transport, on the other hand, is ideal for any type of car shipping. With this method of transportation, however, the cars are entirely exposed to the elements and road debris.  This means that there is a chance that the car ends up with scratched or other minor issues that you will have to deal with upon arrival.

Another new feature of today’s various car shipping service providers is that they no longer rely on chains to secure the cars they are transporting. As mentioned before, these chains were fairly problematic and had the potential to cause serious harm to the cars being transported. Today, shipping companies use straps, which are connected directly to the wheels of the car rather than the frame itself. When applied correctly— which is very easy to do— the only potential damage to the car would be to the rim of the tire, which is a quick and inexpensive fix, as opposed to having to fix the entire frame of the car.

These days, there are countless companies that offer a car shipping service, it is just a matter of finding the one that you like and best fits your needs. The great thing about the internet is that you can compare multiple companies quickly and easily based on factors like price, method, time, and so forth, and can even get quotes to have a general idea of what you could end up paying to ship a car. Not only are there more companies, but these companies also offer costumers more route options, meaning it will be much easier to find a company willing to ship to different corners of the country without any problems and bring it directly to your door. With more companies offering this type of service, it also means that shipping a car is much cheaper than it used to be, making it a service that virtually everyone can afford if they shop wisely.

Car shipping services have come a long way since the time of Alexander Winton and his original 18-wheeler truck. Now, with new technologies and better trucks, you can safely get your car from coast-to-coast at fairly reasonable prices. With the addition of options like open car transport and enclosed car transport, you can also choose the right level of protection for your shipment. Regardless of the kind of car you are shipping and where the final destination is, you will have no shortage of companies and shipping options to choose from!