California, also known as the Golden State is one of the biggest states in size and population of the country, its popularity and large variety of attractions and weather attracts thousands of people yearlong. It is considered that one of every 10 United Sates residents live in California. Whether they come for business or tourism purposes, California offers thousands of opportunities for new comers to stay and indulge in its wonders.

California is over 157,000,000 square feet and is home to 37,700,000 people, its capital is Sacramento and the state motto is the famous “Eureka” (We have found it!) exclamation. The state has 5 of the biggest cities nationwide being Los Angeles, San Jose, San Francisco, San Diego, and Fresno, and some of the most visited places worldwide by many. Due to its large size, the state gives room ton some of the country’s biggest. San Bernardino is the biggest county in the country, with about three million acres. In Sacramento you can find the country’s largest Railroad Museum, also near by the city you will find some of California’s Caverns, known to be the largest extension of caverns in the Mother Lode of the region.  In the Castle Air Museum in Atwater, you will find the largest display of military aircraft in the entire state.

As well as having room to allow the largest sites in the country, California also reaches the highest temperatures marked during summer. Death Valley is known to be the driest and hottest place in country with recorder temperatures of up to 115 degrees. Regardless of this high heat, California also offers comforting weather to give place to many National Parks, one of them being the Sequoia National Park where you will find the largest tree with a circumference of  102 feet. The Hollywood Bowl amphitheater located in Hollywood is the largest in the world, offering thousands of venues throughout the year. Hollywood is also known for the famous Star Walk, where hundreds of important and famous people’s names have been imprinted for the past 50 years.  California is also known as the famous and rich people’s backyard, as most of them have decided to make the state’s gorgeous views and cities home.
Due its vast opportunities in every area, California has become an economic power for the country. The city of Los Angeles alone is considered the country’s fourth largest economies and the entire state would be ranked in seventh place worldwide compared to other countries. It is reported that California was the first state to reach a trillion dollar economy. Because the state has such influence in so many aspects it has given room to many industries to flourish and grow stronger with the years. Because the state is such an acclaimed destination, transportation is one of the biggest and strongest industries, however passenger transportation is not the only part of the industry, and the economy has given great room to car shipping and transport.

Open Car transport
The car transport industry is a service that has come in great demand to the state. Not only for commercial purposes transporting cars from dealers to dealers or manufacturers but for private owners who are looking for better opportunities or found better ones out of state. The service is most commonly done via open carriers, meaning cars are transported in one or two story trailers, each car is safely strapped and secured on to each space on the carrier and taken from point to point. There are small carriers that can take from 1 to 6 cars and then there are big carriers that can take from 7 to 11 cars in one trip. Car transport in California usually is the starting or ending point for cross country transportation and bigger carriers are more cost effective to use as more cars can be taken and prices are easier to play with. Although open carriers are not as optimal during winter conditions or harsh road conditions, it is the most common yearlong.

Enclosed Car Shipping
There are some cars that need special requirements and need more protection than other due to their exclusivity and/or age. For these cars the most optimal way to transport them are via enclosed carriers. These carriers are very popular and common too, due to the high rise of ownership of luxury and classic cars. Enclosed carriers are closed trailers that can take from 4 to 6 cars; they are also one or two stories high and safely transport cars from point to point. These carriers are covered with canvases along the sides to enclose the cars inside; some carriers even use metal containers and safely slide in the cars to be strapped in place for transit. Regardless of the distance enclosed carriers travel, these are the most expensive way to transport a car. Coast to coast transport via enclosed may not be very cost effective for drivers, therefore prices to ship via enclosed are much higher than open carriers. Not only because enclosed carriers require more maintenance, but because they can carry less cars, therefore prices to cover for the trip need to be higher.

California as a meeting point
California as a mecca of transportation as it is has many points and possibilities when it comes to shipping cars. Having one of the main ports of the country in Long Beach and in along the whole coast line, California brings in cars from all around the world. The state is also the joining point to ship to Alaska and Hawaii and other countries such as Japan, South America and Canada. In coming cars from the port also assist the transportation from these overseas locations to the inland or to the other coast.

Snowbird Season in the West Coast
Demand for car transport services in California is determined mainly by season and weather, especially if where you’re moving in or out from is located within the northern part of the country. Harsh winters affect greatly the road conditions and drivers are forced to take alternate routes and sometimes not take them at all. Prices to ship a car during this season are high and delivery times are delayed due to the weather. This season is one of the highest peaks for transportation as most snowbirds are looking to relocate to warmer places. Southern California is great point to relocate for many western snow birders. 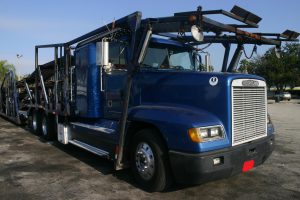 California’s Most Wanted
California as other states has a few important points that contribute to the car transport industry greatly. These points are Los Angeles, San Francisco, Long Beach, Sacramento, and San Diego.  Due to their locations, each city is determined by different things in terms of price and delivery times. Cities in the northern part of the state like Sacramento, San Francisco and San Jose are somewhat affected by winter season and many times road conditions affect on delivery times and prices. These cities are considered part of northern routes, although very common and used yearlong, they have less accessibility and higher prices than southern routes. The benefits of cities like Los Angeles and Long Beach is that they are the starting or ending point  of major southern routes and these have no weather impediments for the most part of the year; trips in and out of Los Angeles to whichever part of the country or overseas leave weekly thanks to the high demand. More southern cities such as San Diego a highly acclaimed transport location, lies on the border line with Mexico, helping transport cars across the borders yearlong. Although San Diego is also part of the southern part of the state, prices to ship cars from or to here are higher as the city is farther down south from main routes.
Car transport in California is in high demand yearlong due to the many opportunities the state offers, not only for people that are looking to transfer to the state but for people that need to transport overseas from anywhere to anywhere. In order to transport a car in California it is important you check weather conditions if traveling through the northern parts of the country, especially during winter and plan with enough time in advance in order to avoid delays and have alternate options in case these occur. Shipping through southern routes is also recommended to be planned with enough time in order to take care of every detail and enjoy a hassle free car transport experience.