Indiana, a Midwest state located at the west of the Appalachians, is the 19th state to become part of the Union on December 11, 1816. Even it is the 38th biggest state; it ranks 16 in most populous in the country and is home to the world known Indy 500. Before becoming a territory, Indiana was populated by many indigenous tribes and settlers from across the borders, however the diversity of Indian tribes was what predominated the most. Due to this fact, when the state was incorporated, it was named Indiana, meaning land of Indians. It is also said that Indiana residents are known by the offensive word “Hoosiers” meaning rough countrymen. Indiana is one of the country’s biggest economic engines and pulls a $215 billion empire under its flap. It is also home to major sports teams and events such as the Indianapolis Colts, Indiana Pacers, as well as home to the Indianapolis 500 and Backyard 400.

Indiana plays a very important role in events that are very important today, the famous Lewis and Clark started their long voyage from Fort Vicennese towards the northwest and the first long-distance car race took place in the Indianapolis Motor Speedway on May of 1911, an event that led to one of the most important car races in the world today. Indiana also contributed to WWII with manufacturing of p-47 fighters in Republic Aviation located in Evansville. The nationwide famous “Raggedy Ann” doll was created in Indiana by Marcella Gruelle in 1914. Baseball, a sport that pulls thousands of fans cross country to see their teams, was first played professionally in Fort Wayne on May of 1871. One of TV’s most famous celebrities, David Letterman was born in Indianapolis. Indiana also plays an important role for the little ones as it is home to Santa Claus, a small place that receives thousands of letters during Christmas time.

Indiana’s motto is “Cross Roads of America” as it has been recorded that since the 1800’s the state has more interstate highways than any other state in the country. Indiana is home to Studebaker Company of South Bend, the biggest manufacturer of horse-drawn wagons that later on turned into a multi millionaire automobile manufacturer. In the early 1900’s, Indiana produced over 200 different makes of cars that are now valuable antiques. Indiana has been an essential piece to the car industry, not only for their massive production in the early 1900’s but because it hauls every year thousands of cars into their world known car races, pushing car transport in Indiana to a very high demand service. 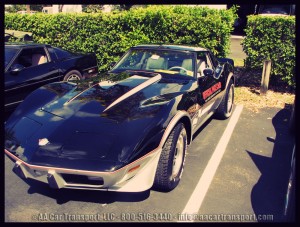 Car Transport into the Race!

As you all may have heard, the Indianapolis 500 is one of the most important races in the car racing business, it is consider among the three most prestigious events in the world. It is held every year in Speedway, Indiana in the Indianapolis Motor Speedway during Memorial Weekend and thousands of fans come in to be part of this amazing rush.  Drivers come in from all over the world to compete and be part of this one time show and just like transportation arrangements had to be done for the entire crew, cars had to be shipped in from all over, making this one of the peaks of car transport in Indiana.

Sports cars are very fragile and unique and require an incredible amount of care when it comes to transporting them, most drivers own their own transporters, however even these have to be well equipped to transport their cars.  The best way to transport these vehicles is via an enclosed trailer, it offers maximum security and protection for the cars from point to point and even for storage. When drivers get in to the race, many times hotels cannot provide parking for big trailers and they have to be taken to the track for storage until the race, having the car mounted on an enclosed will provide more protection and a peace of mind to the driver.

Another factor that is put into consideration when it comes to shipping these babies is the environment. Road conditions cannot be guaranteed and many times are not optimal. One can only plan ahead and hope, however you will not know how bad it will be until it hits on you the road. Dust and rocks are minor inconveniences; harsh weather like storms can be a real menace with strong winds, hail storms and slippery roads.

It is very important to plan ahead for these trips, not only if you’re transporting a race car into the Indi 500, but in general. Many things can be planned for in advance but not avoided completely; therefore it is important to have a plan in order to transport the car safely. Make sure you speak with your booking agent about all the possibilities to transport your car, if you are on a tight budget, you must work with what you have, however if the possibility to spend a little more is available, don’t hesitate to do so, the extra bucks are worth it. After all, it is your car you are protecting.

Read also How to ship a car and Golden Rules to avoid Car Transport Scam!

Need more details about Car Transport in Indiana? call us at (800) 516-3440 to speak with one of our representatives!

If you are ready to ship your car, you can a FREE Online Quote