Although Georgia was the last of the original 13 colonies to establish it became the fourth state to be part of the Union, by ratifying the constitution on January 2, 1788. The state was named after King George II of Great Britain and is the 24th most extensive state in the country, even though it ranks high, it has the 8th biggest population in the nation.  Georgia has always been a fast growing state and a main point for many events in history, therefore it received the nickname of the “Empire State of the South”, due to its massive amount of peach production, it is also known as the “Peach State”.  The state played a big role in history by hosting the Civil War on its grounds and accounting for the loss of over 18,000 soldiers, it also was one of the states that relocated the most amount of Native Americas to new soil against court rules known as the Trail of Tears, which led to the death of over 3,500 Cherokees.

The state of Georgia has some interesting cities within its border lines, one being Saint Marys the second oldest city in the nation. The first steamship to cross the Atlantic, “The City of Savannah” was named after Savannah.  It is also home to Gainesville, the chicken capital of the world, where it’s illegal to eat chicken with utensils, said that, Georgia serves as the host of the International Poultry Trade Show, the largest poultry convention in the world. Glennville and Vidalia are the only places in the nation that can grow the famous Vidalia onions.  Cordele is considered the watermelon capital of the world. Georgia is also known for its massive production of the three P’s: peanuts, peaches and pecans.  Thomasville, Georgia, known as the city of roses, is said to have the most beautiful roses from the eastern coast.  Forest Park is host of the largest Farmer’s Market where hundreds of farmers gather to sell their one of kind crops. 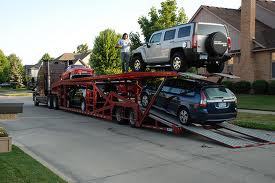 Georgia State is also known for its great movement in promoting education, Wesleyan College in Macon was the first to grant degrees to women. In Athens, you will find the first university that was funded by the government.  The great Berry College located in Rome, Georgia, has the biggest college campus of the world. Education not only limits its self to colleges, Georgia is home to Fort Benning, the biggest infantry training post of the military. It also has other major military bases such as Fort Stewart, Hunter Army Field, Naval Submarine Base Kings Bay, Moody Air Force Base, Robins Air Force Base, and many others.

Due to these major military points, and Georgia’s promising industry, car transport has become a major role to help the state’s growth to become stronger and stronger each day.

As mentioned before Georgia has one of the biggest military presences in the nation with some of the major training locations for soldiers from all branches. Movement to and from these posts is constant and in high demand throughout the whole year as hundreds of men and women move in or move out. The majority of them are looking to move their vehicles from any point they come from the country. As you may know a soldiers life cannot be planned in advance as every time it is constantly changing, therefore car transport has to be available to them on hand as soon as their plans change. Most companies will offer a military discount to help out soldiers on last notice requests and will assist on picking up cars from within post and delivering to the residence or any location soldiers need to, usually they are delivered to their new posts or to their family members in case they are deployed. Regardless of what the issue is, car transport companies are able to transport their vehicles to anywhere in the nation and help them with their relocation and transfers.

Transition to college already is a stressful moment for the student as well as for the family, and worrying about transporting a car to help your son or daughter should be the last thing on your mind. Georgia welcomes thousands of students every year to many points in the state and although many of these students don’t come with a car, many others do need the transportation service. Car transport is in high demand during the beginning and end of semesters usually during May to August as many students are transferring in or graduating and starting to move out.  Student discount may also be available and transportation is a hassle free experience as long as you do it correctly and choose a reliable company.

Although Georgia has many points of interest by many new comers and locals, Atlanta is the main point where most of car transport business is located. Transporting cars to the city or out of the city is in high demand and for most part of the year driver availability is high as well. Transporting to any other location is possible, however is more expensive as availability is not as high and most places are within regular routes. It is always important to provide the exact location of where you need a pick up or delivery with your agent so the best options can be provided and at the best prices.

Read also How to ship your car and Golden Rules to Avoid Car Transport Scam!